Since 2012, residents in Spain are obliged to file form 720. This is an informative declaration of assets and rights located abroad. It is filed between 1 January and 31 March of the year following the year to which the information provided refers.

On which assets and rights is there an obligation to report?

Since its adoption, the model has provided for 3 categories for which taxpayers are obliged to report: real estate, bank accounts and securities or insurance.

In addition, from the financial year 2021, there is an obligation to report on cryptocurrencies.

When and how do the 720 tax return is filed?

It is filed between 1 January and 31 March of the financial year following the one to which the form refers.

The form can only be filed electronically through the Tax Agency's E-Office. To do so, it is necessary to have an electronic certificate.

In the first year there is a duty to file if the assets abroad exceed € 50,000 in one or more of the above categories.

What are the consequences of non-filing?

As this is a purely informative declaration of assets located outside Spain, no tax is payable on its submission.

However, the fines for non-compliance with the reporting obligation can be very high. However, the ruling of the Court of Justice of the EU of 27 January 2022 in case C-788/19 has annulled the hitherto existing penalty regime as being contrary to EU law. Until a new specific penalty regime is approved for this model, the general penalty regime and limitation periods set out in the Tax Law will apply.

At Lozano Schindhelm, we check whether you are obliged to file Form 720 and, if necessary, we prepare and submit the return. In addition, we check year after year whether you are obliged to file it again. We also assist you in the regularisation of previous years, filing the appropriate forms, and we advise you on the appropriateness of applying for the refund of penalties paid as undue income and in the exercise of state liability actions. All this in your language, with high quality standards and backed by more than 15 years of experience in providing tax advice to residents and non-residents, Spanish and foreigners. 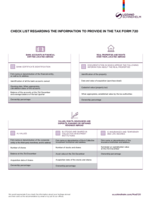